Anemia is not a fun experience! It’s doubly tough in pregnancy when you’re already tired from growing a baby. While mild anemia is fairly common, it can become severe if left untreated or if there’s an underlying condition. Severe untreated anemia can increase the risk of complications for mom and baby. Preterm delivery, low birth weight, and postpartum depression are unfortunately all associated with anemia.

If your care provider diagnoses you with anemia, be sure to follow their guidance so you can get back to feeling normal as soon as possible!

My experience with anemia

When I was pregnant for the first time in 2018, a routine blood test around 28 weeks found me to be anemic. I was tired, out of breath, and my limbs felt like they weighed 100 pounds. I thought it was just how pregnancy was, but I was actually very anemic.

The midwives in charge of my care helped me find a great iron supplement (I took this liquid one). By the time my iron levels were retested a few weeks later, they were still low. Sometimes iron supplements take several weeks to months to improve iron levels and I was running out of time in the pregnancy to get them up. The midwives recommended IV iron infusions to prevent complications during delivery and postpartum.

Hearing that I would be getting iron infused right into my veins totally freaked me out. Was it safe for my baby? What would the side effects be? Did I have to do this? I met with a hematologist and he told me that the liquid iron he prescribed for infusions was safe during pregnancy, I would have minimal side effects, and that I didn’t have to go through with the infusions but because my iron levels were so low I was putting myself and my baby in danger. With everything taken into consideration, I decided to go through with the iron infusions. 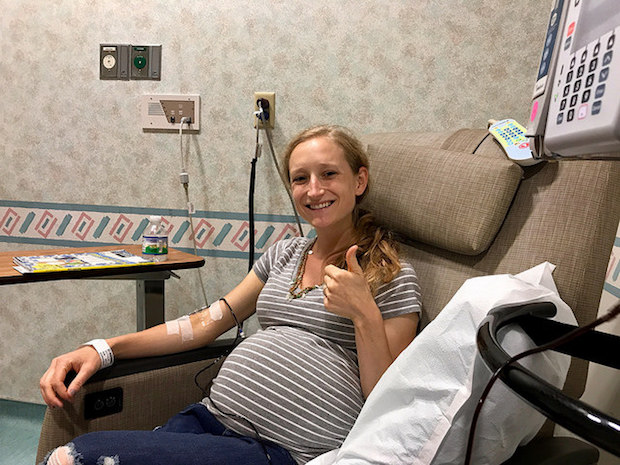 Getting infused with some iron during my first pregnancy!

During my first pregnancy, I was prescribed two IV iron infusions per week until the end of my pregnancy. I would go to the hospital and check into the oncology department. From there, I went to an infusion room (used for chemotherapy or iron infusions) and had a port inserted in my arm. The doctor would then order 200mg of Venofer, which is a brand of liquid iron sucrose that is safe for use during pregnancy.

Once the iron arrived from the hospital’s pharmacy, a nurse would hang the IV bag of iron and attach it to my port. The infusion itself took thirty minutes, and once it was finished a nurse would flush the port with saline, wrap up my arm at the infusion spot, and I’d hang out for a bit to make sure I didn’t have any adverse reactions.

It’s also worth noting that I developed “favorite” nurses because of where they placed the port, what size needle they used, how quick they could do it, etc. because I had a few experiences where there was blood everywhere and lots of pain during the port insertion.

The lovely infusion port! The brown liquid in the IV is the iron going into my veins.

Side effects of IV iron infusions

To say that I was nervous for my first iron infusion would be a huge understatement! First and foremost, I just couldn’t believe it was okay to put an IV of iron into my body while being pregnant. If you’re in the same situation, I can assure you that my daughter is a healthy and happy little girl! She had no known side effects from the infusions and is thriving today.

Personally, I was also concerned how my body would react to the infusions. Common side effects of Venofer include: upset stomach, throwing up, diarrhea, headache, dizziness, hypotension, itching, pain in extremities, joint pain, back pain, muscle cramps, injection site reactions, chest pain, and swelling.

Everybody is different, but the side effects I experienced were: severe fatigue, dizziness, headaches, chest pain, and pain at the injection site. My arms had so many needle marks by the end of the pregnancy, but it was worth it! Also, maybe a little TMI, but after each infusion my pee would be brown from all of the iron. So weird 😂

My arm all wrapped up post-infusion!

Yes! I was told by my hematologist that they weren’t an instant miracle, but that I would start to feel less anemic within a few weeks. I delivered my daughter around 41 weeks, and while my hemoglobin was still low, it wasn’t danger-zone low as it had been near the middle and end of my pregnancy. I had a normal amount of energy while taking care of a newborn and recovering from childbirth.

To make sure my daughter and I both kept our iron levels in a healthy range, I had a few iron infusions while breastfeeding. Because we exclusively breastfed and babies get all their nutrients from breastmilk during exclusive breastfeeding, it was really important that I had a good amount of ferritin, red blood cells, and hemoglobin levels during our breastfeeding journey.

Once again, I was nervous about infusions during breastfeeding. I was mostly concerned that the iron would make my milk taste funny and that my daughter would reject it. This was a big concern for me because she absolutely refused to take a bottle! Everything went well with the iron infusions during our breastfeeding journey and I’m happy to report Sadie didn’t reject me or my milk and we went on to have a great nursing relationship for a couple of years.

The infusion machine administering 200mg of Venofer, which is liquid iron sucrose.

When I became pregnant for the second time in 2022, I immediately wondered if I would have to have iron infusions again. I remembered my hematologist releasing me after my last postpartum appointment (in June 2019) and he said something like “I hope I don’t have to see you again, but I probably will if you get pregnant again.” aaaand spoiler alert… he was right 😂

I became severely anemic earlier in my second pregnancy and the midwives caring for me once again recommended IV iron infusions. My hemoglobin dropped a point in one week and my ferritin was down to a six, so back I went to the hematologist. I was ready to stop passing out, feeling out of breath after walking up stairs, and having my heart flutter constantly!

He prescribed five rounds of 200mg of Venofer and thankfully I have been able to spread them out every two weeks since we caught the anemia earlier in the pregnancy. After the five infusions, I will have my blood tested again and go from there in terms of more infusions, postpartum, etc.

Hanging out at my second IV iron infusion of my second pregnancy!

I am so thankful for medical care! Are iron infusions fun? No, but they are worth it to have a healthy baby and pregnancy! If you’re going through something similar, feel free to reach out to me. I can chat about brands of iron supplements (I’ve tired quite a few!) for days and I’ve had more iron infusions than I can count, so I like to consider myself somewhat experienced with anemia, hematology appointments, bloodwork, and infusions 😆

While I have shared my own personal journey, I’m not a doctor, so don’t take what I say as medical advice! The best thing you can do is check with your doctor, obstetrician, hematologist, midwife, or other care provider for more information on anemia and iron infusions.

Have you ever been anemic?