I actually took a bump picture for once 😂

So, let’s chat about about updates since my last pregnancy diary post, which was around 20 weeks.

–> We picked a name! YAY! Jimmy and I kept going back and forth on names and it finally felt really good to just choose one. Now we call him by his name instead of “baby” or “he” and it’s the best. I’ve made and received a few personalized items and cherish them so much already.

Should I share his name? Wait until after he’s born like we did with Sadie? A few people in our lives have been “meh” about his name, but we like it and that’s what counts! When we were expecting Sadie, I cannot tell you how many people told me that had or knew a dog named Sadie, so there’s that 🤷‍♀️

–> I have found the first and second pregnancy to be incredibly different mentally and emotionally. I was hyperaware of everything the first time around and nowadays I forget which week I’m in, don’t take weekly bump pictures, haven’t kept a pregnancy journal (aside from here on the blog!), and everything feels like it’s flying by.

Physically, though, the pregnancies have felt super similar. I craved and disliked the same foods in the first trimester, and have had a lot of the same symptoms in the second trimester.

A Hernia and Iron Infusions

–> At my last prenatal appointment I had the midwife check me for a hernia and sure enough, I have an inguinal hernia. I had a feeling I did because it was the same discomfort in the same spot as with my first pregnancy. After having Sadie, I saw a surgeon, but the hernia had resolved itself (!) so I didn’t need surgery. I’m hoping it’s the same this time around. I got a maternity belt (so glamorous, lol), but haven’t used it yet.

–> My iron infusions are going well! I have two more to go, and I’m actually having my blood checked today. So, we’ll see where my hemoglobin and ferritin are at. I feel like they’ve got to be improving with all the iron I’m getting. I’m napping a little less these days, so that’s good news 😬 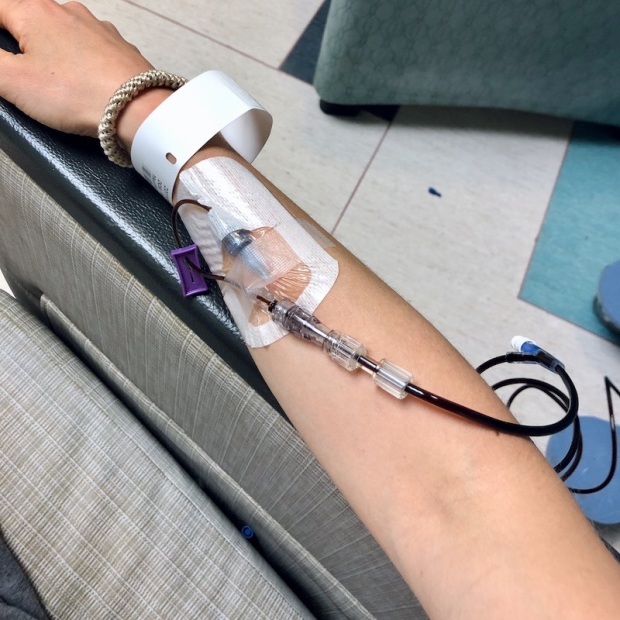 –> I’ve had a few comments on my body that made me uncomfortable. I try to let things go in one ear and out the other. I can’t control how my body carries a baby and I don’t want to. I simply want to grow a healthy child for nine months! I’m measuring right on track and baby is doing well. That is what matters!

–> I’m taking my second glucose test of this pregnancy as I type up this post! I had to take an early glucose test due to my history with gestational diabetes. Now I’m taking it again at the “normal” time pregnant women take it (26-28 weeks) and I’m praying so hard that I pass!!

–> Right around 24 weeks I started getting Braxton hicks contractions. They first started a couple of days after having the stomach flu. I think I was dehydrated and doing too much too soon because one evening my belly was rock hard and it hurt. Jimmy found me on my hands and knees at one point and was like “What is going on?!” and I explained that the hands and knees position helped a bit with the pain and he was like “Um, this is reminding me of when you were in labor with Sadie… are you okay?!”

He promptly forced me onto the couch with a bottle of gatorade and my belly softened up and the pain eased. Since then, I’m careful not to overdo it! I mostly get Braxton hicks in the evening if I’ve had a busy day where I’m on my feet all day. They haven’t been painful since that one time when I was dehydrated, though 🙌

–> We were at the community days event our church participated in on Saturday and were in the sun, walking around, and having fun. The next morning, I felt crampy and started spotting. I have never bled or had spotting during pregnancy, so I was freaked out! I called the midwives and they told me I could go to labor and delivery or monitor the situation at home. I decided to rest at home and see if the spotting stopped. It happened a few more times, so the midwives told me to go to labor and delivery.

I was put on the monitors to check on baby boy and praise God, I heard his heartbeat right away! Everything was okay with him and I was told to follow up with the midwives the next day. I went in for an exam and there was no more bleeding!! Now I just have to be on the lookout in case there’s any more spotting and have an ultrasound to check on everything one more time. It’s scheduled for next week, so we will see. Hopefully it was just a random fluke!

I scheduled an ultrasound at a boutique ultrasound place the day after the bleeding scare because I wanted to see baby and make sure he was okay. The ultrasound was 4D and wow was it amazing! Worth every penny for paying about $100 out of pocket. I saw his adorable little face and felt so much peace about how he’s doing. God is good!

That’s where I’m at right now! Still having iron infusions, taking my second glucose test as I type up this post, and doing well overall. If I’ve learned anything from pregnancy, it to expect the unexpected. As I look forward to the third trimester, I know there will be all sorts of twists, turns, and surprises.

I also know that God already knows what the coming months will be like and He will be with us every step of the way. I’m so thankful for this baby boy and I love him more than I can describe 💙