I think the last time I did a proper pregnancy update was when we found out Baby Z’s gender in May when I was 20 weeks along. I’m now in the third trimester, almost 30 weeks now. What a blessing that God has brought us this far.

Baby girl is doing great! She measured right on track at my last midwife appointment and had a steady heart rate in the 140s. She moves a lot and Jimmy and I can usually feel and see what we think is her feet/head/legs/etc.! I kind of feel like she’s laying sideways (transverse) a lot of the time, but she has some time to get into the head down position if she actually is transverse.

She gave me a scare on the Fourth of July and wasn’t very active at all that day. I was about to call the midwife when finally, late at night, she moved in her “normal” way. The worry and anxiety of parenthood starts way before baby is out of the womb, and it has taught me a lot about how God is truly the One in control.

She has been so spoiled by friends and family with clothes, a crib, and other sweet gifts. She also has a name! I’m not sure if we will share it or not. This is actually something we’re conflicted on: what we will/won’t share about our daughter. Any parents out there have advice or guidelines that you follow? Is it just intuitive?

Malcolm likes to nestle on top of her clothes!

At my 28 week appointment, I took my one hour glucose test and had a routine blood draw along with it. The glucose test was pretty awful. The drink was gross, but the worst part was how terrible I felt afterwards.

First, I thought I was going to throw up. That was followed by a headache and then feeling crazy tired. I took a long nap and was nauseous the whole day. A few days later, I got a call that I failed the glucose test and my blood work revealed I have anemia. Eek!

The midwife told me that if my levels of hemoglobin drop any more, I’ll need to give birth in the hospital (we’re planning a birth center birth, Lord Willing). Where my hemoglobin levels are now, I can deliver at the birth center, but have to have a hep-lock IV in during labor due to the risk of extra bleeding.

I am working on getting those levels up over the next few weeks and have another blood draw later this month to check on everything. The anemia diagnosis totally explains why I have been out of breath walking up hills during dog walks and feeling extra tired.

Choosing to accept the gestational diabetes diagnosis would require some extra monitoring and possible intervention, which was a lot to think about as well. The monitoring meant checking my blood sugar levels four times a day, meeting with a high risk doctor, having some extra ultrasounds to check on baby’s size, and a possible induction if she grew too large too soon.

We prayed and talked and decided to accept the gestational diabetes diagnosis without going through the three hour glucose test. We felt peace about the extra monitoring and possible interventions. High risk doctors and hospitals are there to help us, and we’re thankful for that. 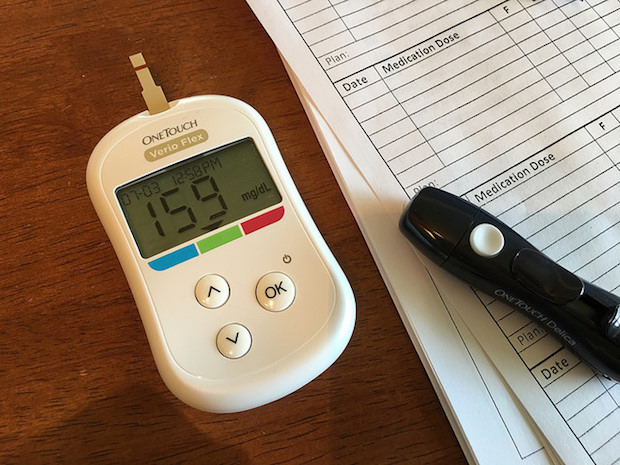 So, that’s how I found myself diagnosed with gestational diabetes. I had to take a class to learn to control my blood sugar with diet and exercise and now take my blood sugar four times a day. The plan is to meet with a high risk doctor after a week of testing my blood sugar levels and decide on a plan of care based off of the results.

I have had a few high readings, which is nerve-wracking. I don’t want to take insulin or medication unless it’s 100% necessary. Taking oral medication would also risk me out of delivering at the birth center. I know if we have to deliver in the hospital and need a higher level of care with insulin or medication because diet and exercise isn’t cutting it, then that’s just part of God’s plan and we’ll do anything to make sure our baby girl is healthy.

I’ve learned the high levels generally correlate with eating too many carbohydrates during a meal, so I’ve had to learn to cut down on carbohydrates and up my other nutrient intake so I’m not too hungry. It’s definitely a learning experience and such a tricky balance with eating the right things to have good blood sugar levels. I don’t know how people who have diabetes do it day in and day out.

I’m definitely taking comfort in the fact that gestational diabetes is a condition that only occurs during pregnancy (so if I need medication or have to continue monitoring my blood sugar levels, it’s only for a few more months) and that so far, our daughter has been healthy and doing great!

My next appointment with the maternal fetal medicine doctor is this week, so we’re praying for insight and good health as we move forward! I know God is going to be with us every step of the way and has everything in His capable hands.

Other baby-related things: we created our registry, have our baby shower coming up this month, and have started working on the nursery! I’ll share more about the nursery in another post since this one is pretty long already. Thank you to everyone for your prayers, love, and support as we journey through this exciting time! It means so much to us 🙂