Thank you to everyone for the sweet comments about our new pup, Mavis. A few of you asked for more details on her, so that’s what I’m blogging about today!

Why we chose a cocker spaniel

Longtime readers will remember when my parents surprised my sister with a cocker spaniel for her 15th birthday. That was in 2013, so I was still living at home and had the chance to get to know the pup (Brandy) for almost a year before Jimmy and I got married and bought our house.

Brandy quickly stole my heart. She was, and still is, very sweet, playful, and happy. Hoping to have a similar experience of having a happy, easygoing dog, Jimmy and I decided to get Mavis from the same breeder as Brandy.

I was able to visit the breeder when Mavis’ litter was five weeks old and choose which puppy I wanted. I chose Mavis because she was quiet, curious, and cuddly.

The first time I met Mavis, when she was five-weeks-old.

Where Mavis’ name came from

I’ve had so many people hear the name Mavis and kind of make a funny face, but I just love her name! As a child, I learned to type by using the software program Mavis Beacon Teaches Typing and actually enjoyed it (did anyone else out there learn to type from Mavis Beacon?!).

I had forgotten about the name until Jimmy and I watched the children’s movie Hotel Transylvania, which I think is so cute. One of the characters is named Mavis, and it reminded me of my childhood and I instantly thought it was a cute, unique name for a puppy.

She’s only a little over nine weeks, so it’s tough to tell her personality, but so far I’d say she is sassy, confident, and playful. When she sleeps, she sleeps hard. When she plays, she plays hard. She has already met quite a few dogs that are much bigger than her and hasn’t been afraid. She’s not afraid of the vacuum, thunder, or much of anything that I can tell.

We’re trying to introduce her to as many dogs, people, and situations as possible while she’s young so she grows up to be a well rounded dog. The sassiness comes from her knowing what she wants and not stopping until she gets it. We’re working on that 😉 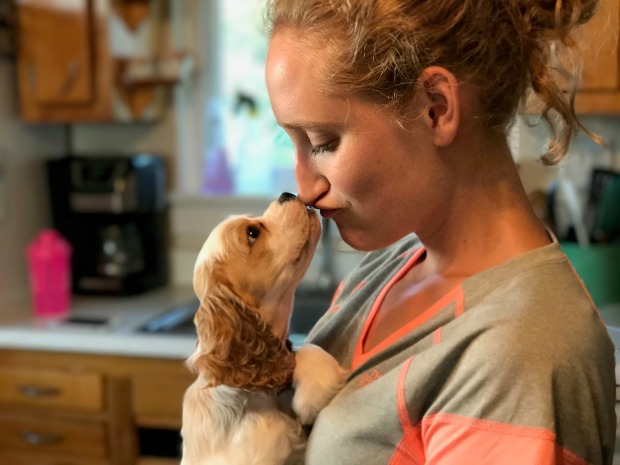 How Jimmy and I are adjusting

Puppies are a lot of work, and require constant attention and dedication. The first few nights we had her, Mavis woke us up 3-4x per night, and thankfully she’s down to two bathroom breaks a night now. We are tired to say the least. I don’t know how parents with babies survive. Seriously, parents out there… how do you do it?

It has been a big change to go from leisurely sipping coffee in the morning to chasing after a puppy from sun up to sun down, letting her outside a million times a day, and only leaving the house in two to three hour increments. We are also outnumbered by animals, which is kind of fun and kind of crazy. I know things will get easier as she grows up and we adjust, but having a new pup comes with a lot of challenges and changes. I remind myself daily to chill out and realize we’ll all be just fine!

We are also loving Mavis. She’s just adorable, and my favorite thing is when she follows me out to our garden and wanders around while I pick tomatoes, green beans, and zucchini. I love rubbing her belly, seeing her discover the world around her, and taking walks with Jimmy, Lola, and Mavis. Maybe soon we will get out Malcolm’s stroller so he can join us, too 😉

How all of the pets are adjusting to each other

Lola and Malcolm are adjusting to Mavis (and vice versa) amazingly. I’m honestly surprised at how well they get along. Mavis’ absolute favorite thing to do is play with Lola and Malcolm. Lola is gentle and mostly patient with her, and even plays with her when she feels like it. Malcolm and Mavis run around the house chasing each other and wrestling and don’t stop until Mavis flops over and falls asleep or we separate them. I’m really happy with how they’re all getting along!

A rare moment of Mavis sitting still instead of playing with Lola.

I just enrolled her in 12 weeks of training classes at our local Petco. She is going to take Puppy Level 1 and 2, and after that will be ready to take her AKC S.T.A.R. Puppy Test, which evaluates puppies on their training and owners on their responsibility in taking care of the puppy.

After we complete her 12 weeks of training, and if she passes her AKC S.T.A.R. Puppy Test, we may go on to do more training. Since watching her over the past week, I’ve noticed how athletic she is, and thought that she would be great in agility competitions (though the training would be time consuming!). There’s also the thought of having her become a therapy dog so we can volunteer at hospitals, nursing homes, and schools. Or maybe she will just be Mavis, our dog. Who knows! I’m excited to see what the future holds, though.

Last but not least, I put together a little video compilation of the day we brought home Mavis mixed with footage of her first week here.