I know, pretty random title for a blog post! Okay, fellow cat owners, have you heard of Soft Claws? 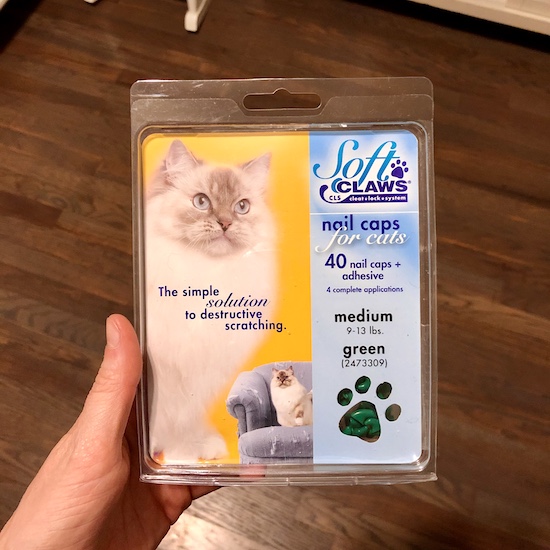 They’re nail caps for cats as an alternative to declawing when dealing with scratching. Our Malcolm boy is pretty destructive with his nails. He’s ruined our curtains and fabric chairs and benches, but that’s to be expected. He has been scratching Sadie lately, so we decided to try out Soft Claws (<–affiliate link!).

Malcolm is great with allowing us to clip his nails, so getting the nail caps on him wasn’t too hard. We applied them on Friday night and he has only lost two over the past few days. That’s a win in my book because I thought he would have them all off within minutes. He looks pretty cute with green nails!

Onto swimming! My mom, Sadie, and I spent the day together last week and decided to take Sadie for a dip in the pool at my parents’ local YMCA and it was a ton of fun!

Sadie took a little bit to warm up to the idea, especially after she accidentally went underwater, but by the end of our outing, she was splashing and screaming with joy. I can’t wait to do it again soon 🙂

I’ve been trying to think of fun little crafts for Sadie to do while we patiently await the arrival of spring weather and can play outside as much as possible. I had the bright idea to buy a couple of bags of dried beans and put them in a big tote with containers and scoops so she could pour the beans and keep it all contained within the tote.

She thought it would be great to put all the beans on the floor and also eat as many as she could stuff into her mouth, lol!

At first I was like, man this is a fail. Then I realized that she was having a lot of fun, even if it didn’t go as I intended. So, I’d say it was a win. I think that’s how it is in life sometimes, too. We plan something and it doesn’t go as we thought it would, but it ends up being awesome in its own way, you know?

Okay, well I better get my day started! We recently filmed a vlog that shows what a day in our life is like, so watch that if you want to get an idea of what we’ll be up to. Basically working, playing, and getting into all sorts of random fun 🙂