Part II of Sadie’s birth story has a bit more to do with me than her, but it’s part of the story of how she arrived, so I’m sharing. It is a little bit TMI (as most birth stories are!), so here’s your warning 🙂

I left off with Jimmy, Sadie, and I having breakfast and resting after she was born in part I of Sadie’s birth story.

After we had some time to connect as a family, the nurse wanted me to get up, go pee, and maybe take a shower. She helped me off the bed and to the bathroom where I peed a little and then promptly passed out.

I woke up on the floor of the bathroom smelling ammonia. The nurse had smelling salts under my nose to wake me up. She helped me off the ground and back into bed.

About 20 minutes later, we tried to get me to pee and get cleaned up again but I passed out again and needed smelling salts to wake me up.

A little while later, we thought the third time would be the charm, but no luck. I couldn’t pee and almost passed out once more, but the nurse got me back to the bed before I fully fainted.

By this point, the nurse and midwife were palpating my belly and couldn’t find my uterus. They were concerned that my bladder was so full that my uterus couldn’t move down to where it needed to after birth and that I’d continue to bleed.

Bleeding is obviously a danger with childbirth, but my anemia made it a little more serious. We all agreed that since I kept passing out while trying to get up and use the bathroom, it was a good idea to try a catheter.

Ugh. The catheterization process was 100% worse than labor and delivery. Thankfully, I got through it and was able to have a liter of urine drained. Crazy!

By this point, the midwife had called 911 again and we prepared for a transfer to the local hospital.

The nurse and midwife weren’t comfortable with how much I had passed out combined with blood loss and my anemia, so they wanted to have my hemoglobin levels tested, get my hematologist’s opinion on anything that would need to be done at the hospital regarding the results, and just have me monitored for a bit.

So, the paramedics arrived around 10:30 AM and off I went into the ambulance. It was so incredibly hard to leave Sadie and Jimmy. I just remember laying on the stretcher and seeing Jimmy cradling Sadie in his arms among all the people in the room.

The plan was for Sadie to be discharged from the birth center and for Jimmy and her to meet me at the hospital. The midwife thought it was a good idea for Jimmy to call my mom and dad to get some support for getting Sadie into her car seat and driving over to the hospital, so my parents headed to the birth center and met him there to help out. We were so thankful they could drop everything and come help us. 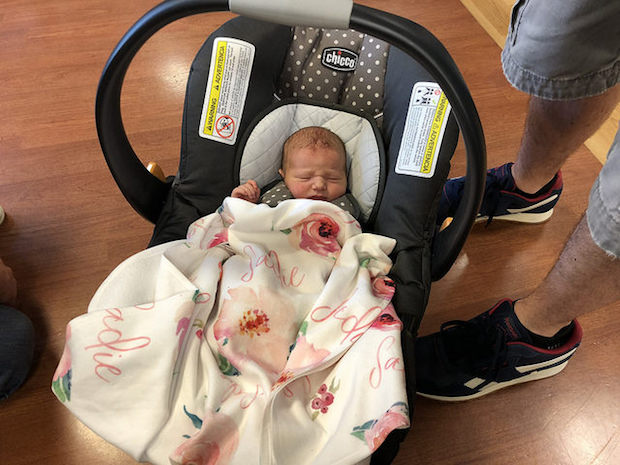 The ambulance ride was interesting. I could tell the paramedics weren’t fans of the birth center, and they made it pretty clear to me by asking why I didn’t have IV fluids during the birth and why I hadn’t had my blood sugar tested during and after labor due to my gestational diabetes.

I was too tired to really explain how much of a whirlwind everything had been, so I just tried to chat with the paramedics about their day and thanked them for transferring me.

I arrived at the hospital and had my blood drawn to check my hemoglobin levels. They were still low after the four iron infusions I had during pregnancy and it was confirmed that I was still anemic. I’m so glad I decided to go through with the infusions during pregnancy, because I’m not sure what would’ve happened with blood loss and passing out if I hadn’t.

The nurses in the hospital monitored me while I waited for my parents, Jimmy, and Sadie to arrive at the hospital.

My hematologist was okay with my hemoglobin levels as long as I was stable and not passing out because I already had another iron infusion scheduled a few weeks later. I was so relieved I wouldn’t need any infusions right then and there!

My parents, Jimmy, and Sadie arrived about an hour after I was admitted to the hospital. It was amazing to see all of them and I cried happy tears! From that point on, it was just a waiting game of me being monitored until I could be released to go home.

While I was waiting to be discharged, my brother and sister-in-law came to meet Sadie and brought us all coffee! Having them there really got my mind off of the craziness that had ensued and it was such a joy to see them interact with their new niece!

By 3:00 PM, it was decided that I was good to go and we were discharged and on our way home! Everyone in my family wanted to hang out with us and Sadie and help Jimmy and I since we hadn’t slept the night before, so we had a pizza party at our house with my siblings and parents.

Well, I should say they had a pizza party. Jimmy and I got home and crashed. We slept like the dead for a few hours while my family passed Sadie around and we were so, so thankful for their help!

And that’s Sadie’s birth story! It was amazing, hard, beautiful and absolutely one of the best experiences of my life! We look back on her birth and really see God’s hand in every single moment and it’s just indescribable to see the many, many ways He cared for us and watched over us. We still can’t believe he blessed us with our sweet daughter and are so thankful ❤

Every good and perfect gift is from above, coming down from the Father of the heavenly lights, who does not change like shifting shadows. James 1:17